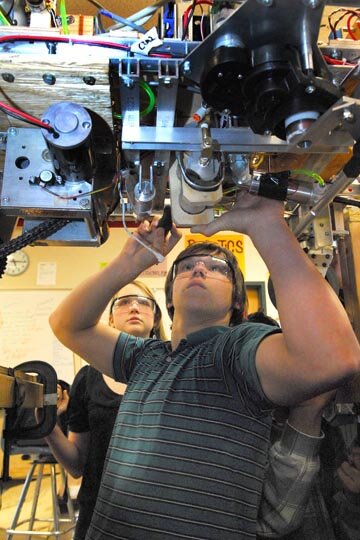 EL DORADO High School freshman Avery Hughes, front, and Rebeka Woodel work on the robot.
His name is Marvin. He doesn't drink. He doesn't eat and he doesn't talk but one thing he does do is help in the education of some El Dorado County high school students.

On Monday evening, students from El Dorado, Oak Ridge, Ponderosa and Union Mine high schools stood over a wooden framed box that has wheels and a lot of electrical circuits and doo dads. The students are members of the El Dorado Union High School District Robotics Team, the Circuit Breakers.

With screw drivers, wire cutters and drills in hand, the students tweaked this and turned that with the hope that Marvin, the robot, would soon be able to roll along the floor of the classroom at Union Mine High School.

"We were given a game on Jan. 9 that we have to play," said volunteer parent and team coordinator Charlotte Lindborg. "The robot has to be designed to play the game. We had six weeks to build it so our deadline is tomorrow night at 9 p.m. We have to bag and tag the robot. We can't touch it again until the competition."

She said that students worked in design group, planning group and electronics group. The three components all work together to make the robot a possibility.

The only thing that isn't working yet is the front and side kickers. When finished the kickers will hit a soccer ball. The students are working on perfecting the steering. The programmers are working like crazy to complete the directions. At the time there is a lag between the computer and the robot but things are progressing.

After everything is completed there is a test course that includes a tunnel and a goal.

The team has used the entire six weeks to construct the robot.

"We didn't know what we would have to build and we didn't have any parts until Jan. 9 and then at that point the students took off," Lindborg said.

Before the fun of building the robot there was some preparation done.

"First is an organization to inspire the team. The organizers put together the kit of parts. The parts are donated from different companies. We have a basic kit of parts that we start with and we pay $6,500 for registration and the kit of parts," Lindborg said.

"This year we got a grant from NASA. NASA will receive a game as a thank you and the team can add up to $3,500 in parts," Lindborg said.

The El Dorado Union High District kids work after school and on weekends. They have been meeting six days a week to complete the robot. On weekends they go from 9 a.m. to 10 p.m.

"What it has done for these kids is some of them had an interest but really no experience so this has given them hands-on experience of working with creative genius minds and coming up with something they can be really proud of. It's a huge confidence booster," Lindborg said.

The robot project is an extra-curricular activity. It's district wide with all the other alternative schools involved as well.

"Some of these kids have been waiting since second grade for a hands-on technology opportunity and there's just nothing out there available until they get to college so this gives them an opportunity and they are just hungry for it and they're just excelling. Most of the conversations are over my head," Charlotte said.

There are 32 kids on the team and about 20 show up for each work session.

Tristen Velasco, 14 from Oak Ridge High School, is a freshman. He is designing the team tee shirts.

Students like 16-year old Jessica Sandoval, a Junior at Oak Ridge, has learned a lot.

"I didn't know basically anything about mechanical," she said. "I didn't know anything about the CAD drawings that we would do. After I finished with the CAD drawings, I started working on the robot as well. I helped with the casters. I worked on the front wheel steering and I got to learn to use drill presses, the table saw and metal. It's really fun here. It's a really good program."

She added, she knew about screwdrivers and stuff like that.

She thought it was amazing to see the robot run the first time.

The El Dorado team will be participating in the initial For Inspiration and Recognition of Science and Technology (FIRST) Robotics Competition (FRC) in early April. The team will be one of approximately 1,700 teams nationwide competing for a spot in the FIRST championship at the Georgia Dome in Atlanta, Ga.

The FIRST robotics team is appreciative for the guidance from the volunteer mechanical, electrical, and computer science students and engineers. The team members said they enjoyed the opportunity to work with and become inspired by the generous and knowledgeable mentors.